During the repair of the bridge, the reconstruction of the overhead contact line had to be divided into several stages.

In the first stage (phase A) the right half of the bridge was repaired, so it was necessary to transfer the trolleybus transportation during the reconstruction to the left side of the bridge. Part of the reconstruction was the exchange of TV poles on the right side of the bridge. EŽ Praha provided delivery, disassembly and assembly of masts and overhead contact lines. Due to the higher load on the reconstruction, a part of the existing masts (10 pcs) on the left side was reinforced with an additional reinforcement. Subsequently, the traction line was moved in the direction of Bazaly from the right to the left. The provisional line was simple, non-tensioned, suspended on long fiberglass cantilevers by means of delta hinges and flexible arc clips.

After completing the repair of the communications and the position of the new masts, the traction line was restored in the original geometry. The new TV is simple, non-tensioned, the contact wire is Cu 100 mm2. Part of the construction was the delivery and installation of two new electric switches, one mechanical switch and one crossing. The total length of the contact wire is 3850 m.

In the second stage (phase A1), the trolley bus traffic was transferred to the right side of the road (in the direction of Michálkovice) after the stop “Most Pionýrů” to the stop “Stadion Bazaly”. The overhead contact line over the repaired area was dropped and the existing CW was provisionally anchored. The existing masts on the right side of the bridge were fitted with double fiberglass cantilevers 9-12 m long. The existing tracks (Michálkovice direction) were hung on the cantilevers and the track in the direction to the center was newly suspended. In order to move the traffic to the right side of the bridge, it was necessary to dismantle most of the existing switches (three electric and two mechanical) and then install two new electric switches. The contact wire is simple and uncompensated. In total, 1500 m of trolleybus track was moved to a provisional position during construction, the length of the new contact wire is 2300 m (Cu 100 mm2).

In the third stage (phases B + C) the traffic was completely interrupted due to construction work on the bridge and especially at the adjacent crossroad Sokolská x Českobratrská (not part of this construction). On the bridge from the “Most Pionýrů” stop to the ramp from Bohumínská Street in the direction of Michálkovice, the contact wire was installed in the final state including one new electric switch and two sets of electric and mechanical switch. The line is simple, uncompensated, suspended on stainless steel ropes.

Furthermore, from the entry and exit ramps on Bohumínská Street to the “Stadion Bazaly” stop, the traffic was transferred from the right to the left half of the road (in the direction of Michálkovice). Overhead contact line over the repaired space was dismantled. he new masts on the left side of the bridge were fitted with fiberglass cantilevers on which the trolley tracks of both directions are suspended. A temporary asymmetric 20 ° mechanical switch was set up to maintain the turning track to the right from Bohumínská Street in the direction of Michálkovice. The contact line is again simple and uncompensated. The total contact wire length is 5730 m (Cu 100 mm2).

In the final stage all temporary tracks were dismantled (turning track to the right from Bohumínská Street towards Michálkovice, including the mechanical switch and track on Bohumínská Street to the “Stadion Bazaly” stop in the direction of Michálkovice). New traction masts (14 pieces) were installed on the right side of the bridge and the traction line was installed to final state, including a new symmetrical mechanical switch. Subsequently, a traction line from Bohumínská Street towards the Most Pionýrů stop, including a trolley crossing, was installed. The overhead contact line is simple, uncompensated suspended on stainless steel ropes. The total length of the contact wire is 3500 m (Cu 100 mm2). 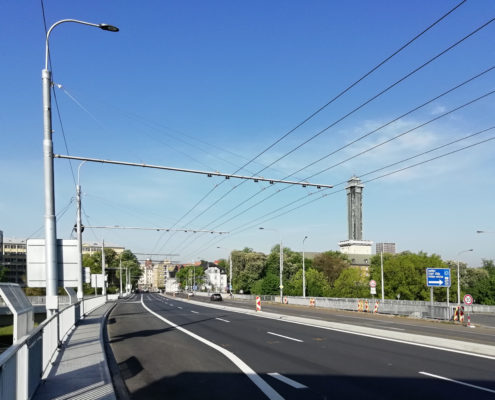 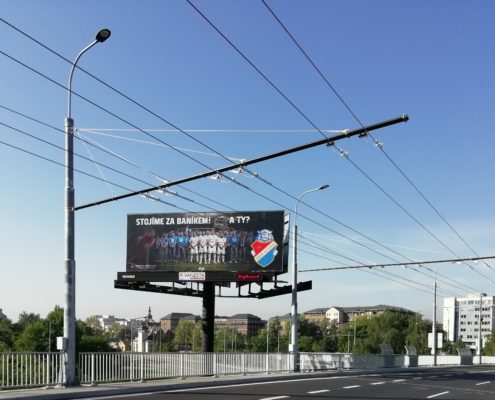 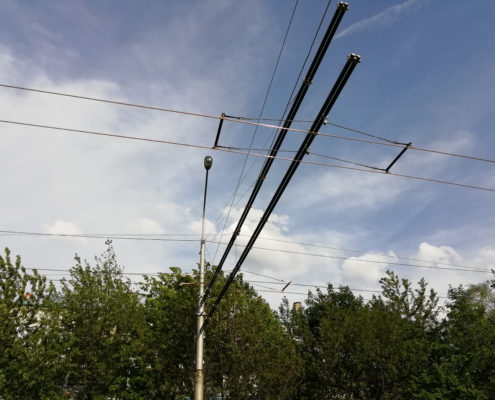 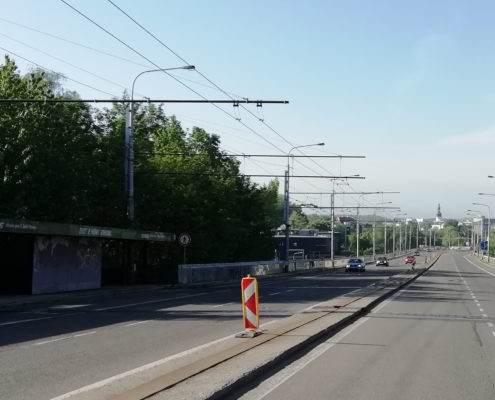 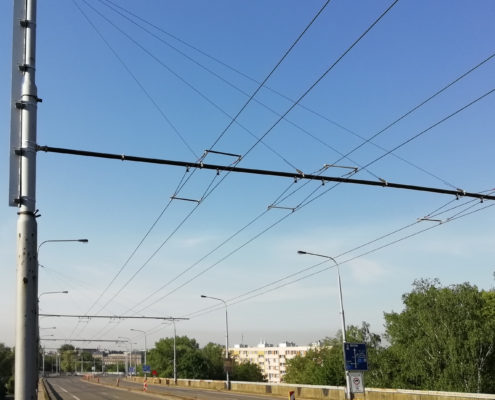 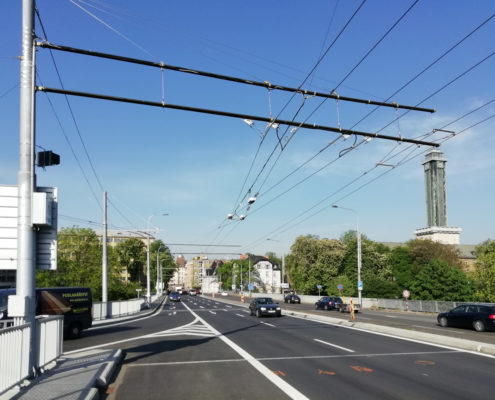 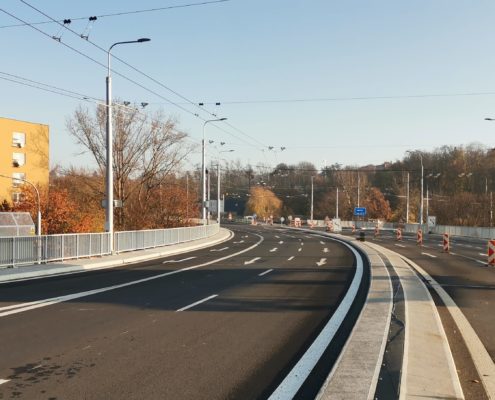 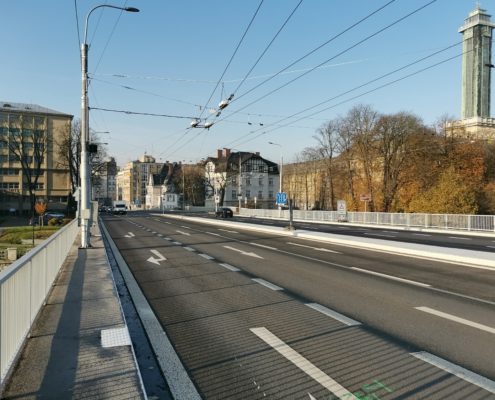 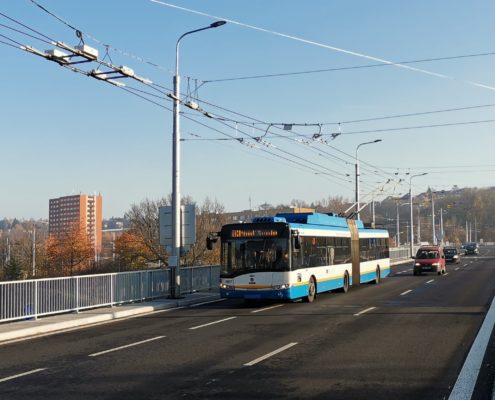 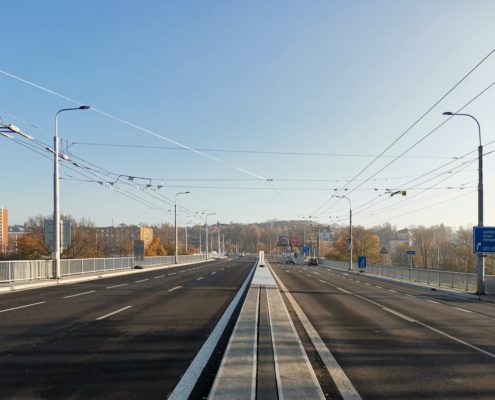 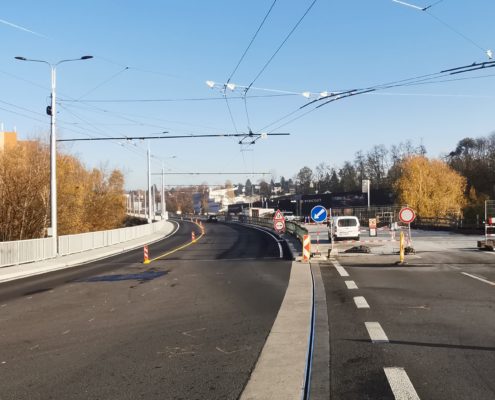 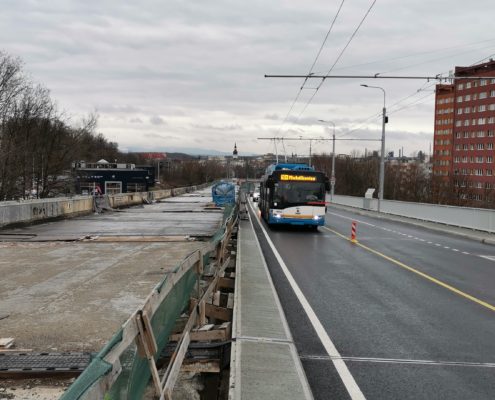 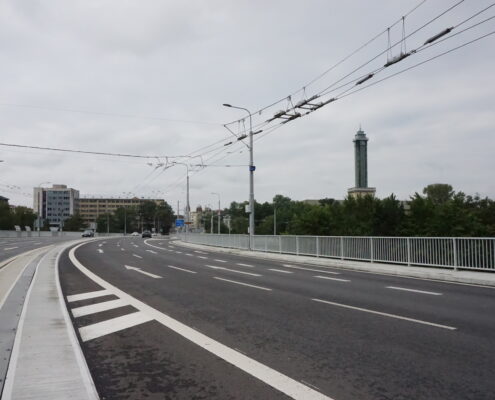 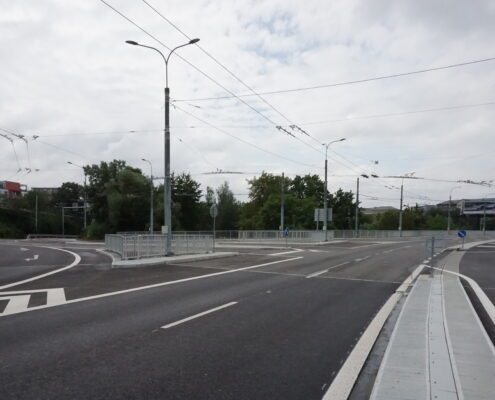 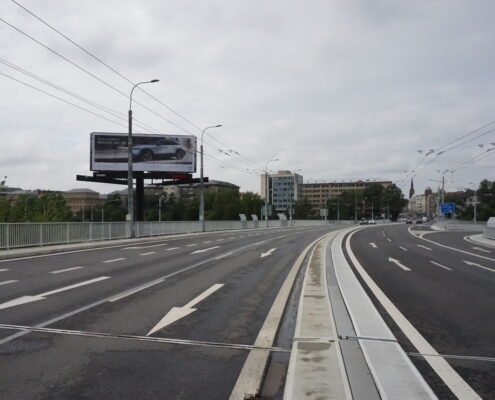 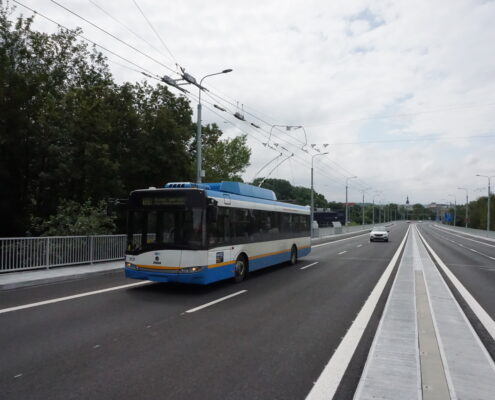 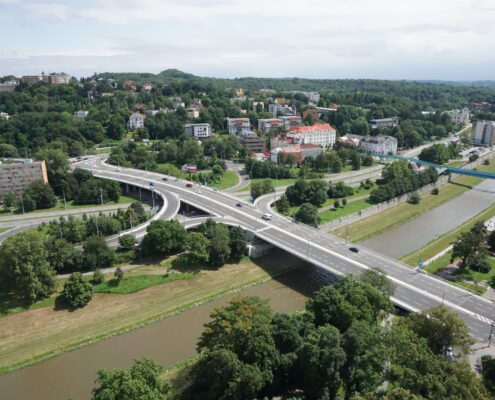 Reconstrution of the converter station Vyšehrad II
Scroll to top
We use cookies to ensure that we give you the best experience on our website. If you continue to use this site we will assume that you are happy with it.OK